Last week we lost two members of our family.  It was a very tough week.  I was honored when I was asked to make a memorial pendant to honor my uncle.  His children were looking for something that could hold ashes but also be made without.  His daughter said it would be cool if we could do something like a bullet, since he loved weapons.

I have been saving brass casings thinking someday I will make something jewelry related with them and I have just never done it. 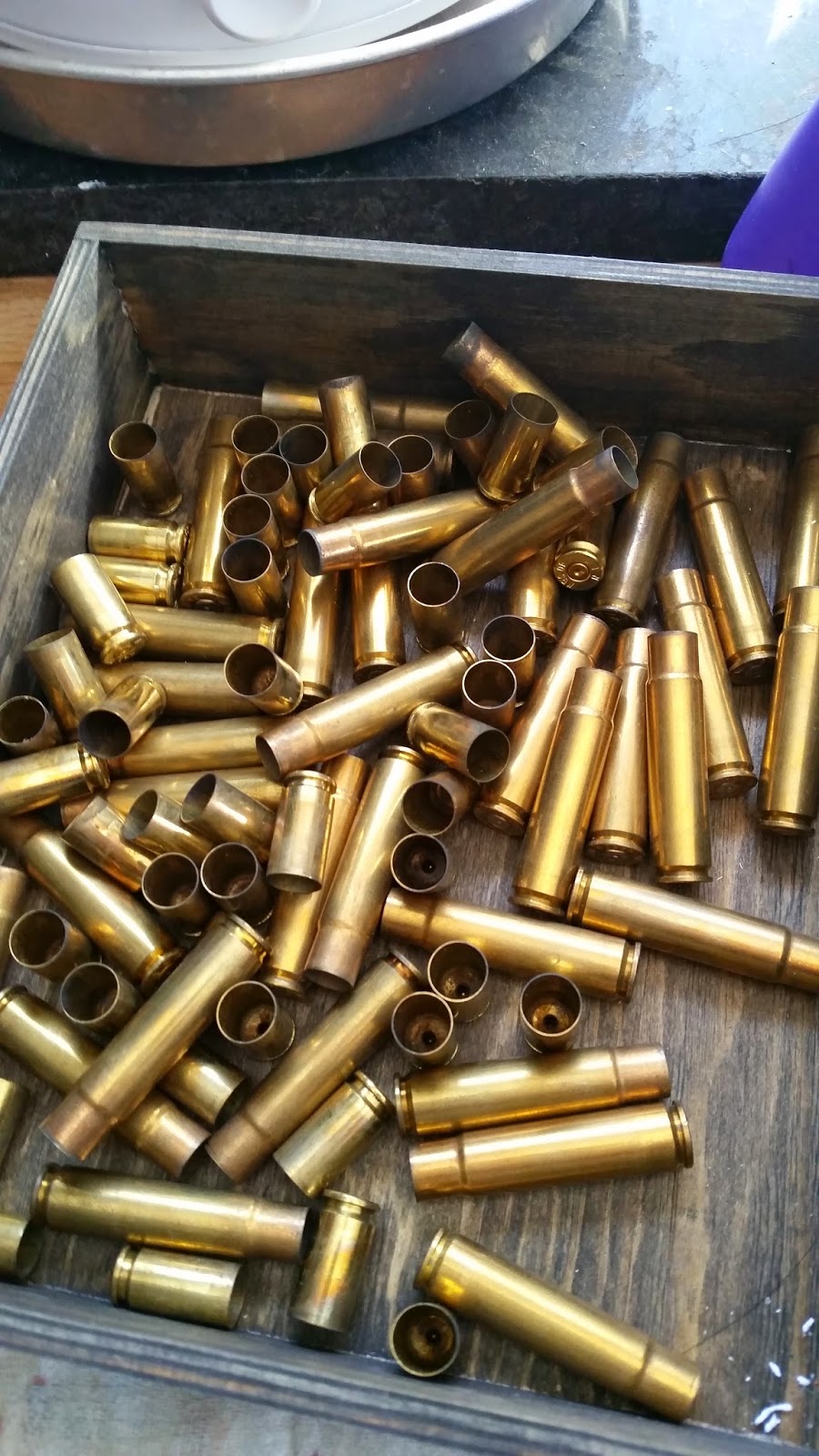 I messaged Karen since I know she etches all the time.  She walked me through the basics as I was terrified to use acid in my house.
(you can read her tutorial on etching aluminum here)

I also Googled etching brass casings since they are an odd shape.  I got some great tips.  I thought I'd walk you through the process with pictures.  By no means is this a tutorial, but I thought it was cool to see them come together!

I am so glad I "bit the bullet" and dove into etching brass!  I am hooked. 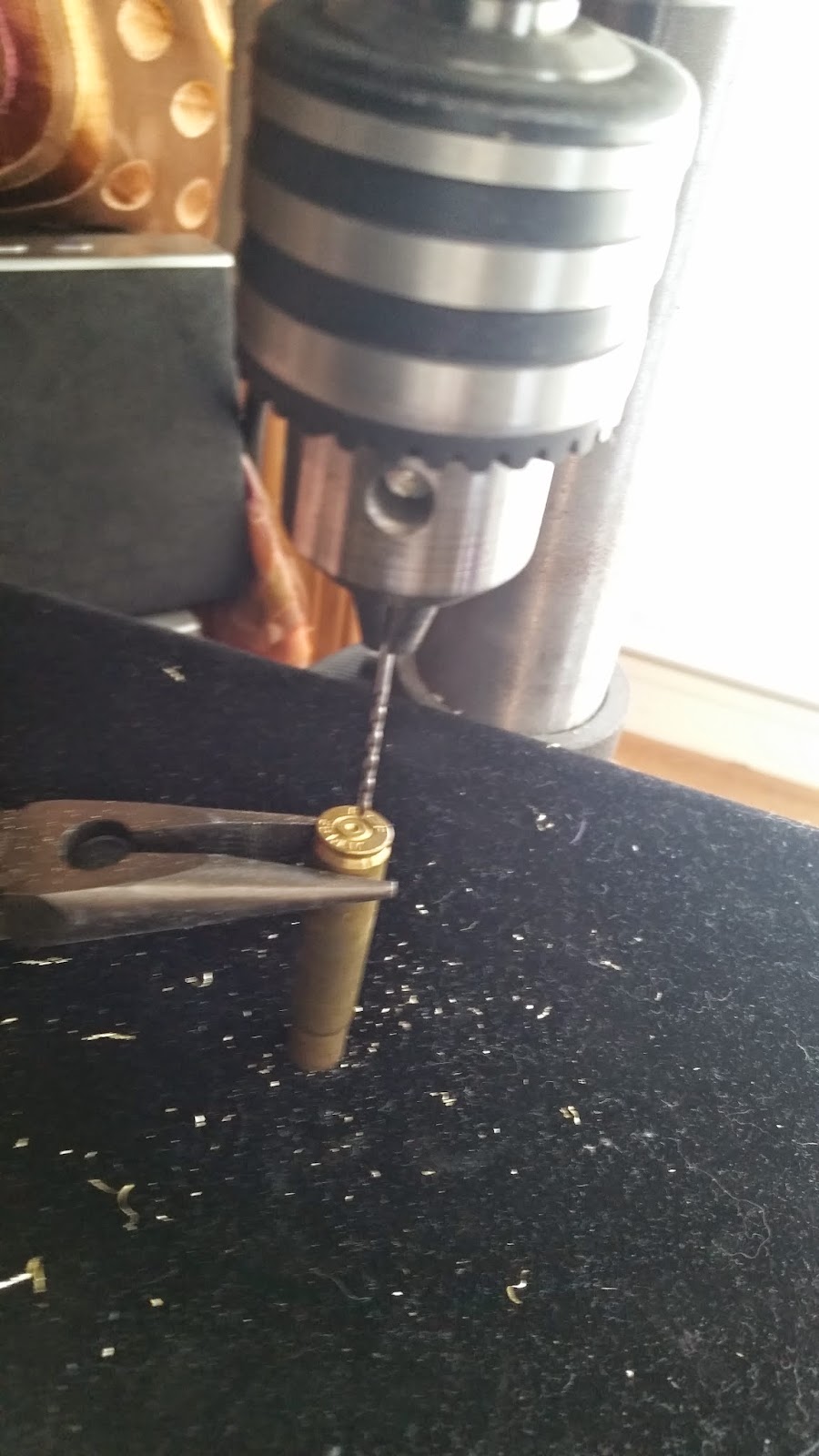 first I drilled each one through the top.  some did NOT drill well and got tossed aside.  I also broke one drill bit during the process. 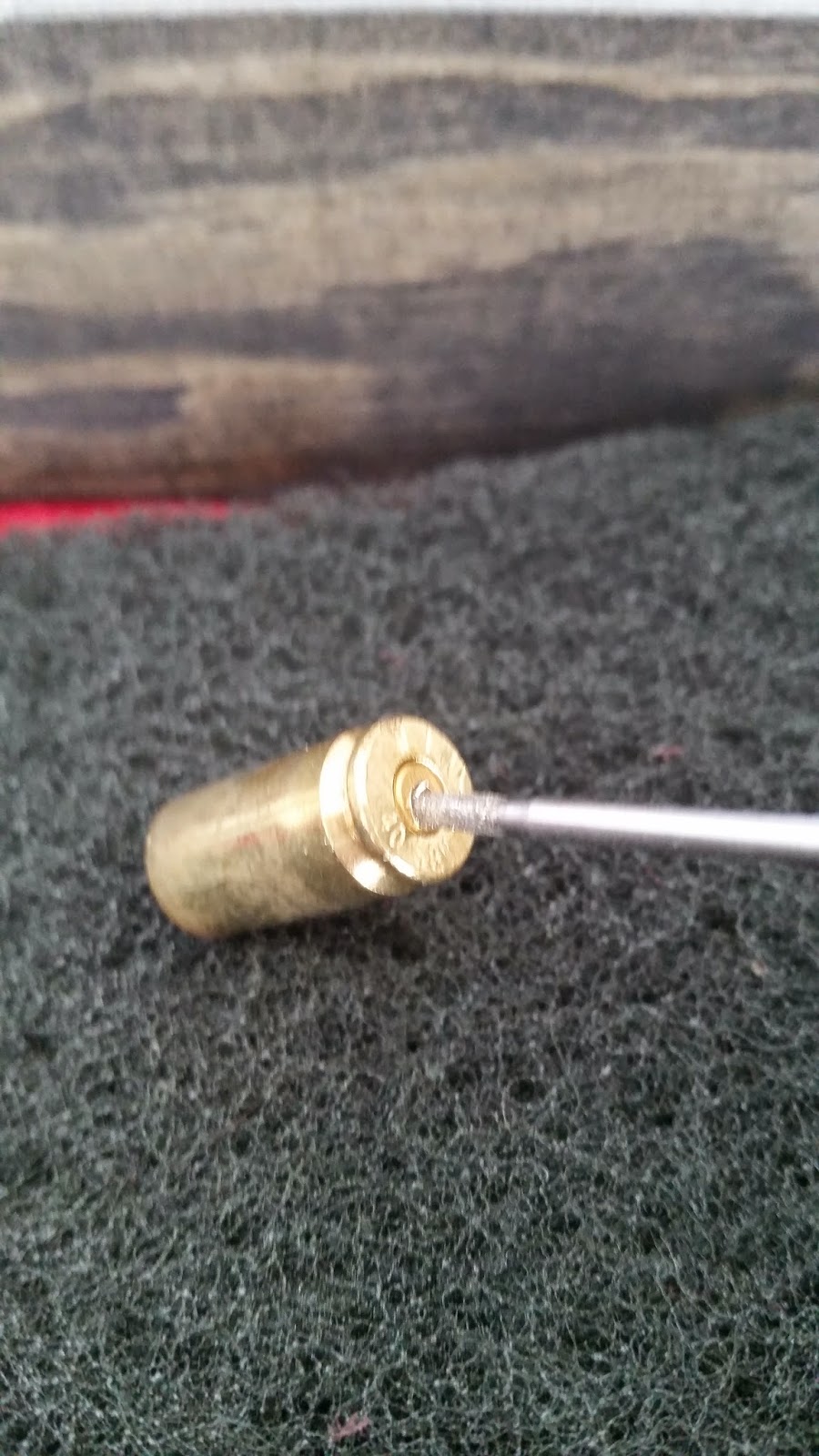 then I used my Dremel to clean up the drill holes 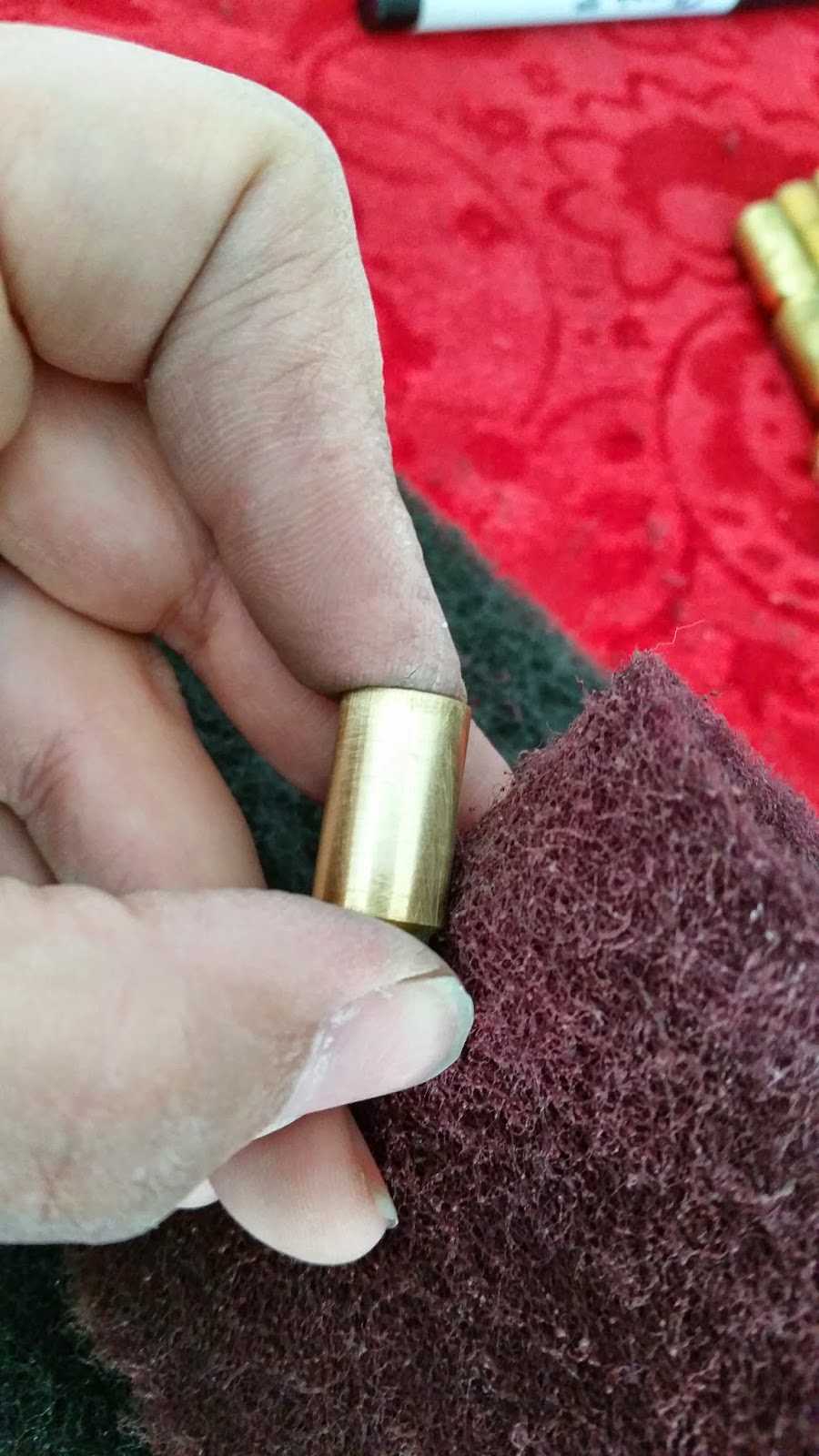 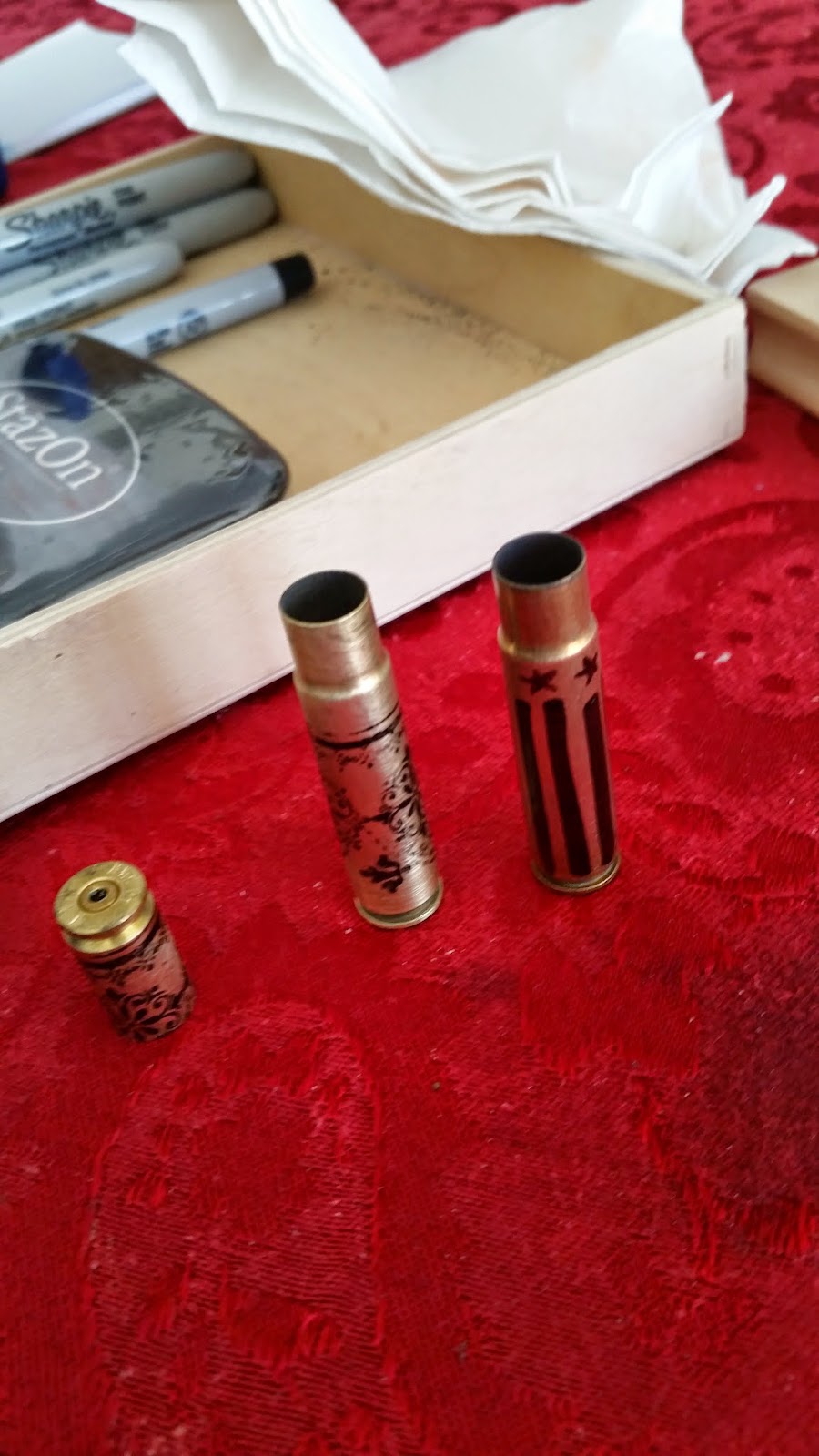 I used both sharpies to draw on designs and stayz on ink.  I definitely prefered the stayz on designs best and did them for most. 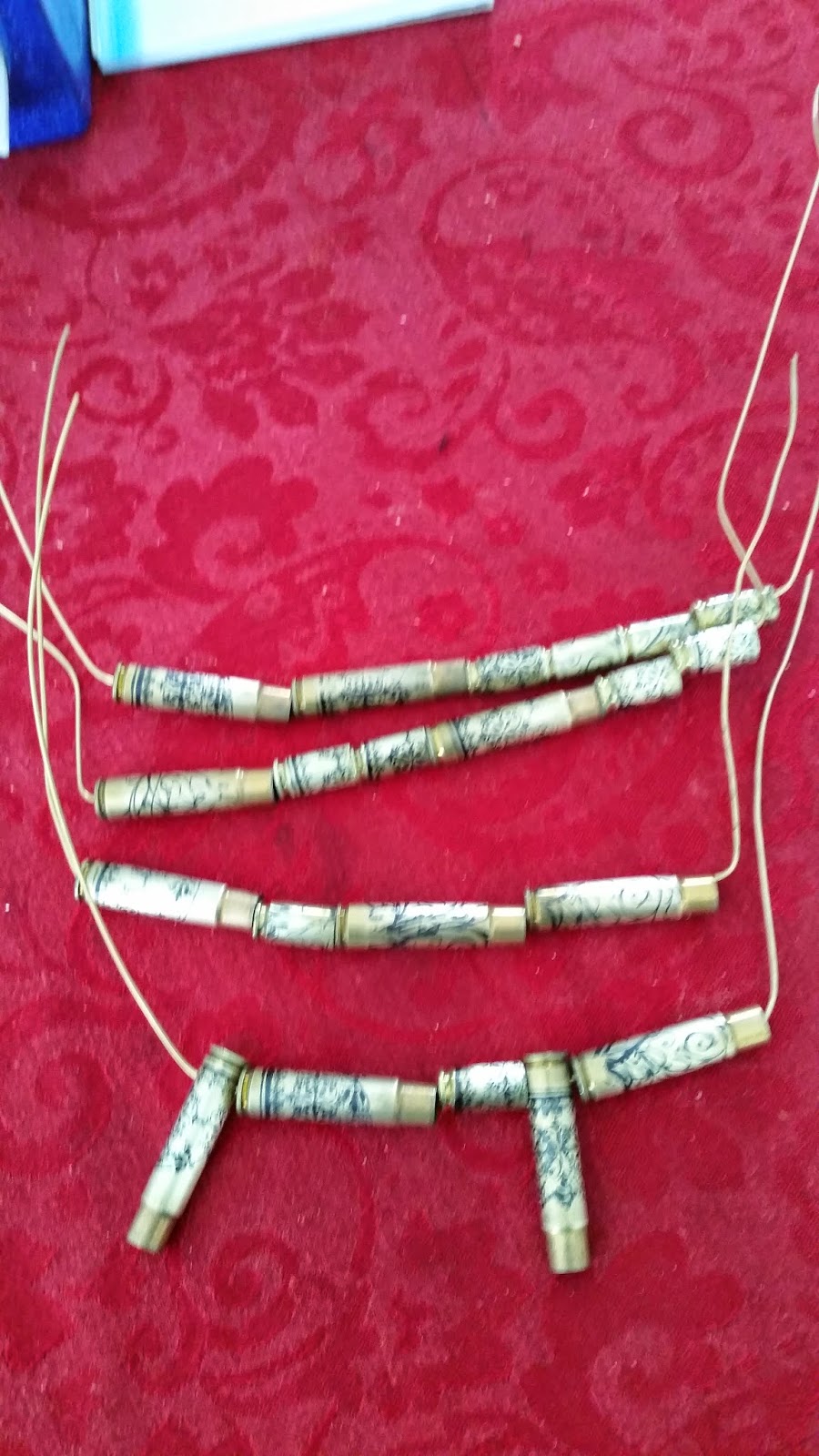 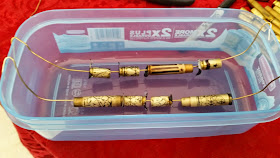 I strung them on wire so I could dunk them in the acid and remove them easily. 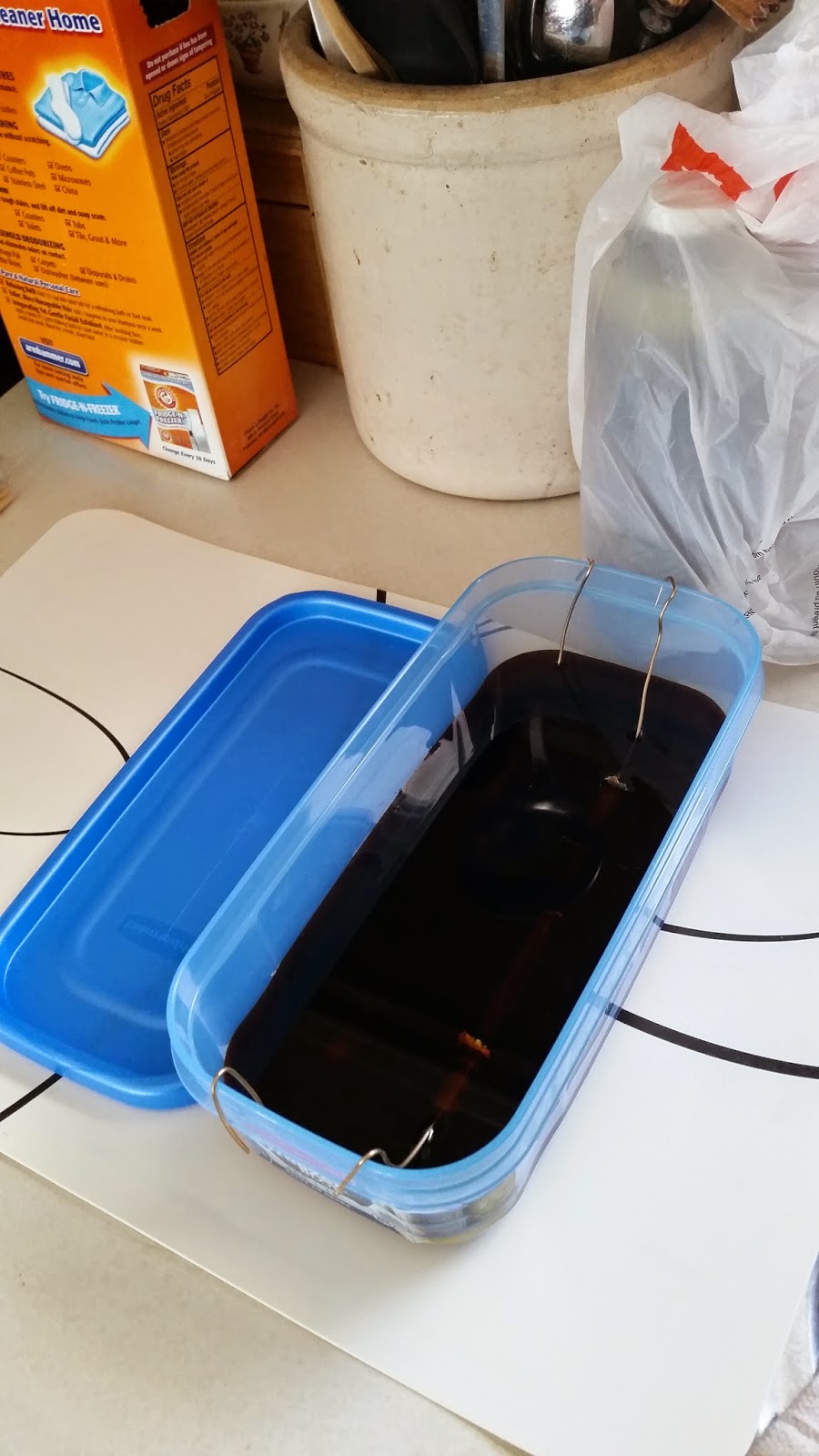 acid bath for about 20 minutes

Then they got taken out, neutralized and rinsed.  this was a painstaking part for me, and I used a TON of baking soda because I am so paranoid!  It was messier then I expected as well, and next time, I will probably do this outside- although I manage to contain all that needed to be.  I also bought a plastic place mat to put under everything in case of mess and to protect my counter.  It worked great!

After they were all etched, then I used a brass brush to remove any ink, and rinsed them again, and threw them into the tumbler to shine them up and clean them thoroughly. 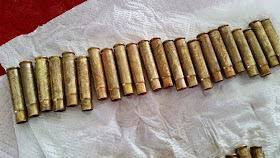 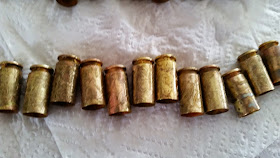 After the tumbler they got antiqued with liver of sulfur, polished with polish pads and were ready for the next phase. 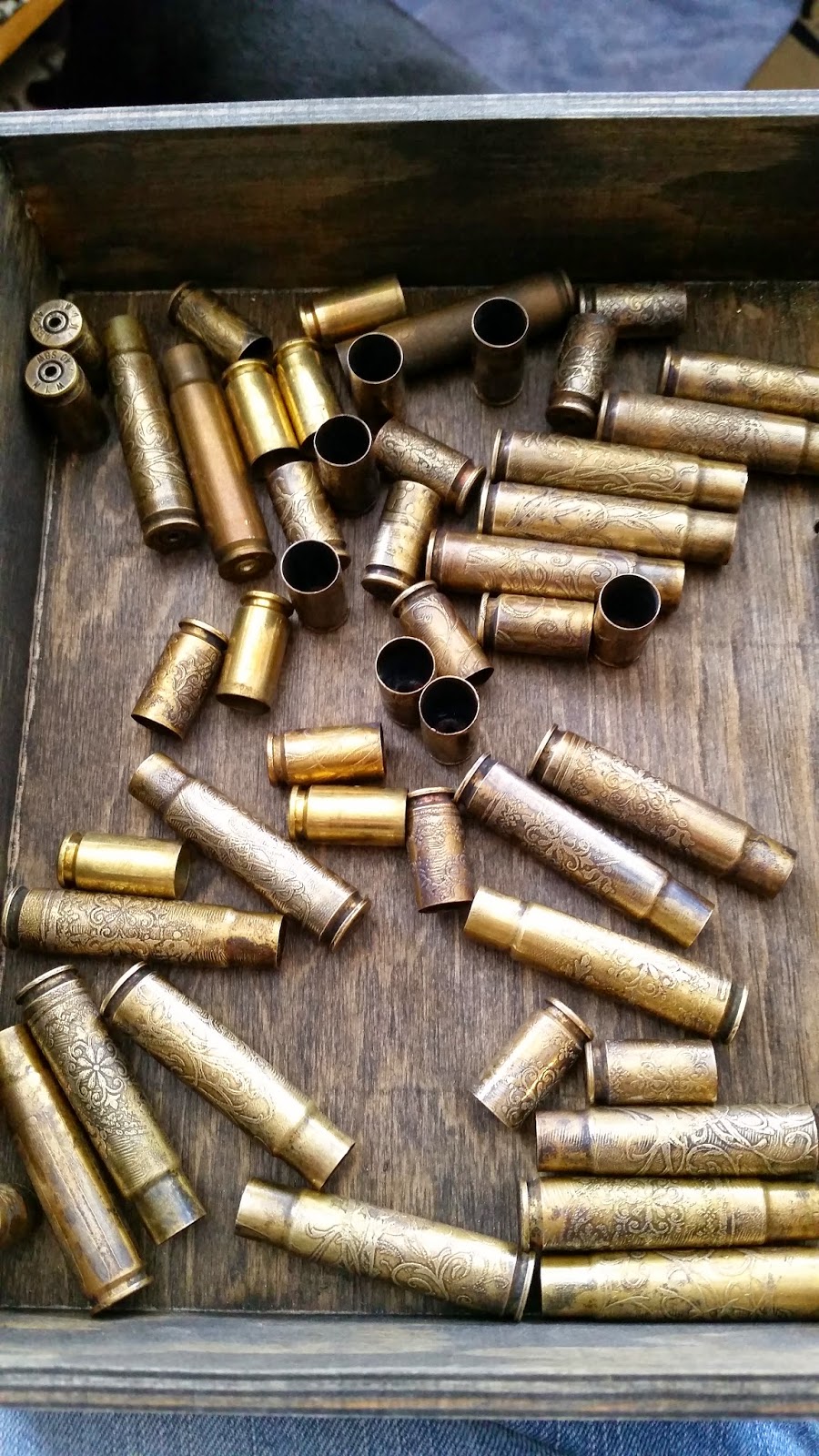 I torched some brass wire to antique it a bit, and made bails through each of the holes at the top. 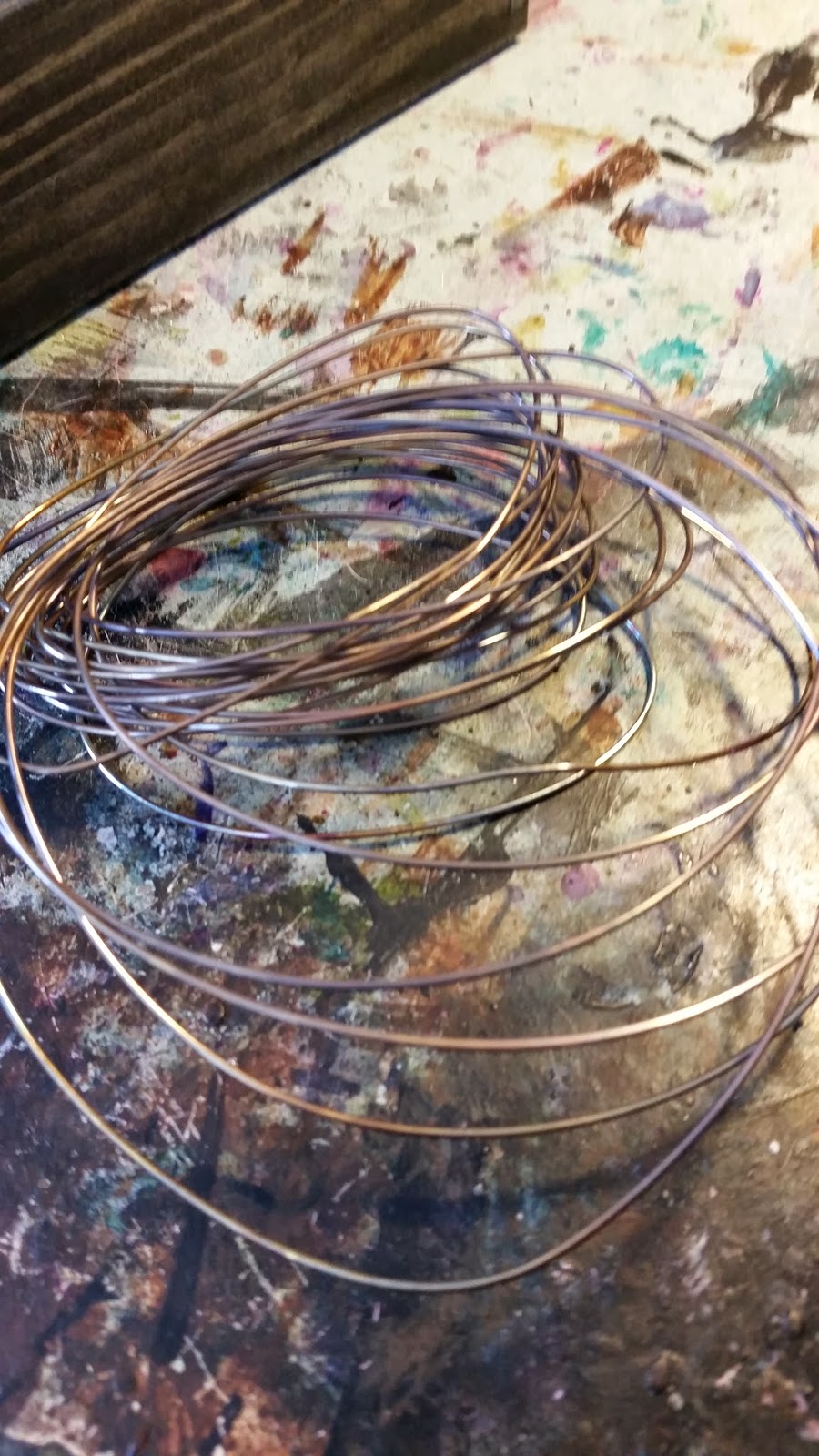 After they had bails, I added black polymer clay to the inside.  I stuffed it way in so it went around the wire inside to grab it- and formed the bottom like a bullet shape. 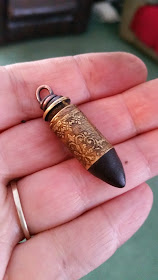 That is the finished product.  I did run into some problems with the polymer in the brass though.  It kept cracking at the edge of the bullet casing....sometimes it just made a ridge and other times a huge crack that made the entire tip break off.  So I filled the ridges with more clay and re-baked.  The broken ones I dug out some of the center, and added sculpey glue and more sculpey and re-baked.  they were better.  I spoke with Ginger of Blue Bottle Tree and she thought perhaps the clay was packed so tight the gasses couldn't ecaspe. I never even thought of that, plus, the brass gets hotter then the clay.......

So I did a batch packing a little at a time, and I cooked the first two fillings at a lower temp to set them but hopefully not overheat it......and they still had some ridges to fill, but not as bad.

Just something to think about and be ready for if you fill bullet casings with polymer. 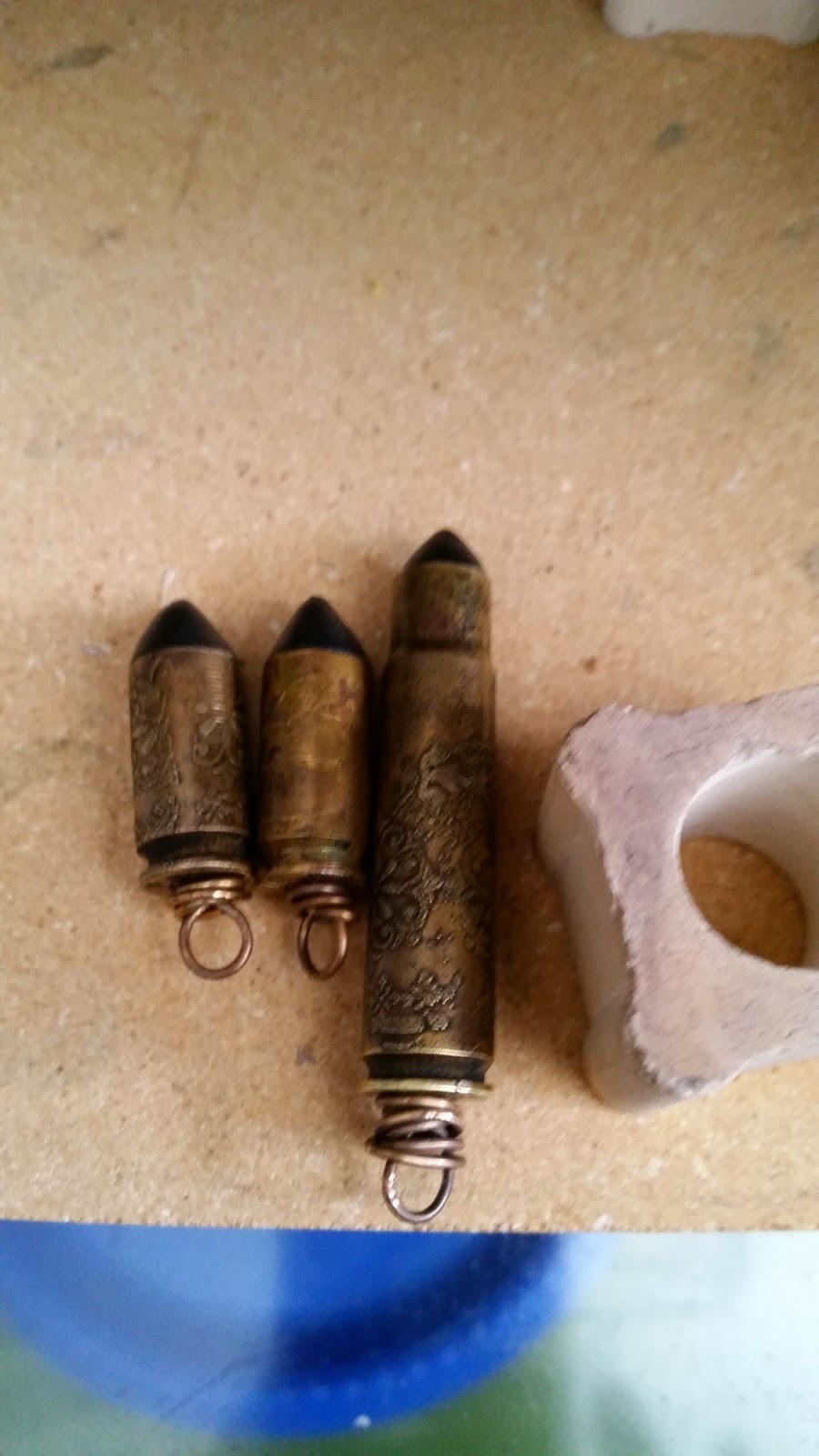 The last batch had the ashes mixed in with the clay for those who wanted it that way.  That was emotionally tougher for me then I thought it would be.  How I did it was, I put some bigger pieces inside and mixed some thinner ash into the clay, then proceeded as I had for the others.

In the end, I was so happy with them, as was everyone else.  If they didn't want them as a necklace, they could use them as a key chain, or hang it from a car mirror.  I think my uncle would have been pleased and got a kick out of it.  I am so happy I had a chance to go outside my comfort zone and make something special like this. 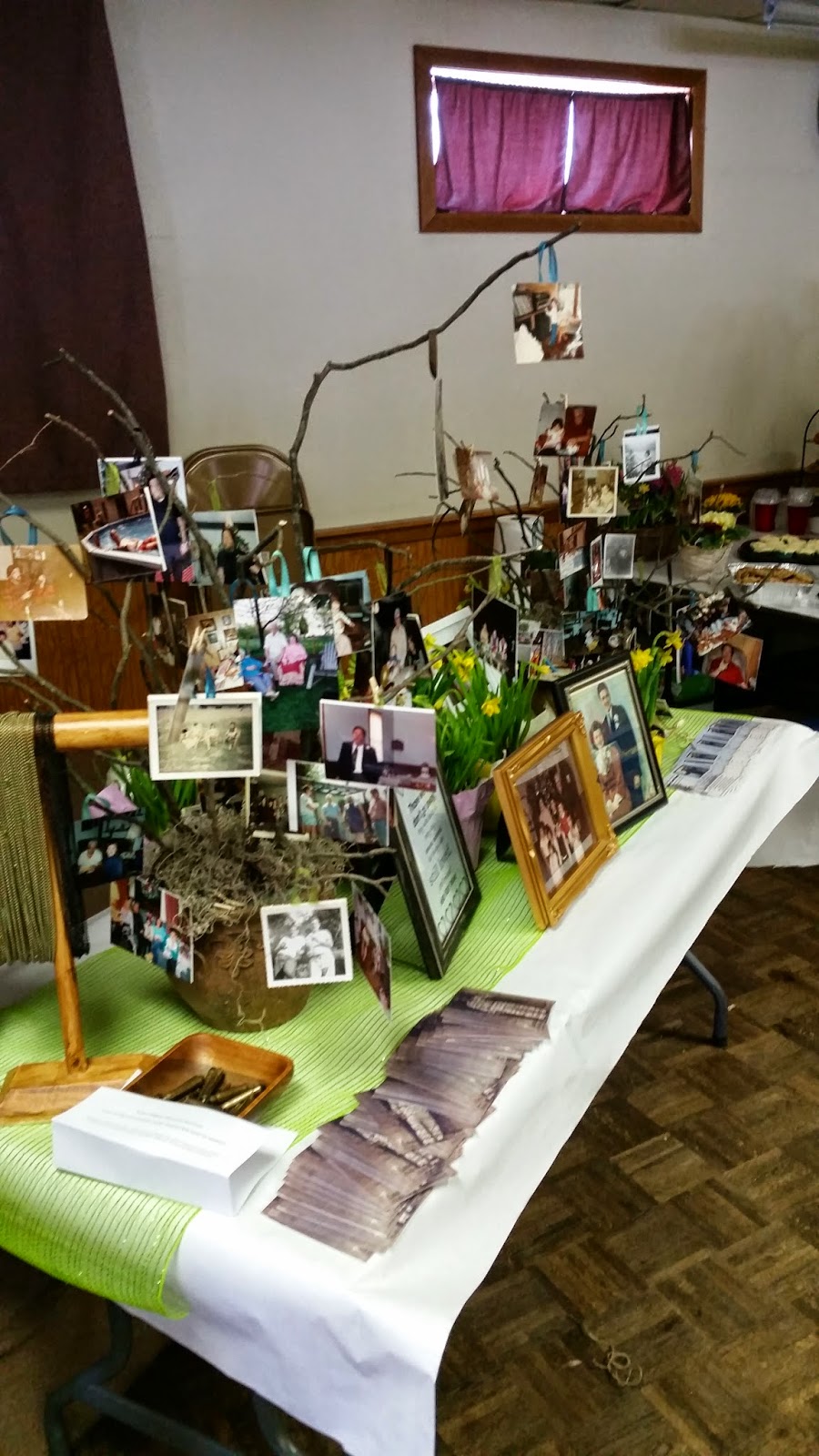 you could pick a ball chain and pendant off the memorial table, since each one was a little bit different.

Of course, everyone got a ball chain to put it on, but I had to make something I'd wear more often, so I make another charm necklace. And since there were extra's I put one on my key chain too. 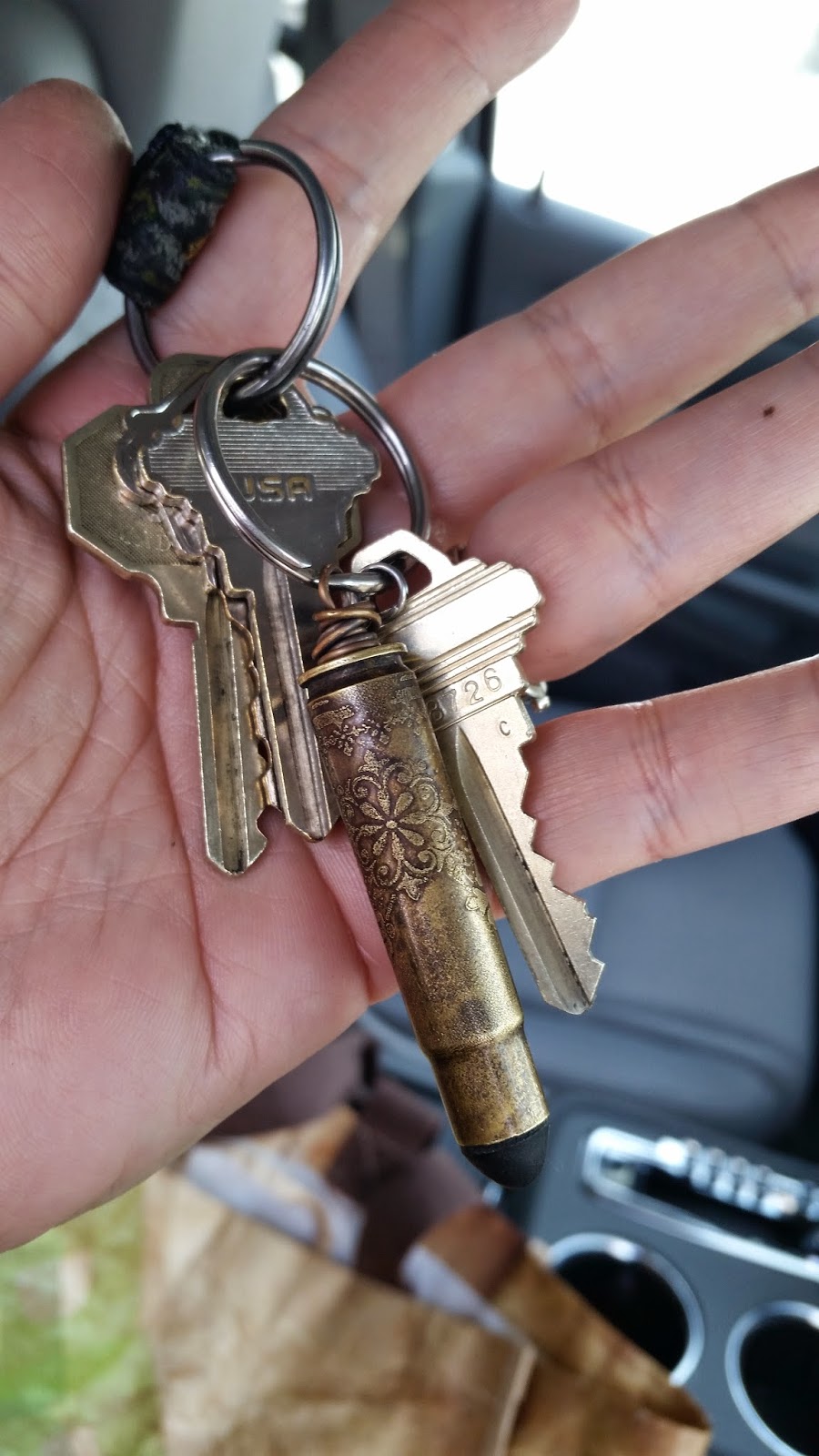 Art really is healing, and it was nice to listen to music and make these throughout the week.

Have you ever made something special for someone?  A keepsake, or memento?  Jewelry is such a great way to wear a remembrance, that I am sure you all have.  I'd love to hear about what you made- and if you want to share the story and a picture on the groups facebook page, I think that would be really great- and a way to honor those they were made for as well.